Model Management with Python and RStudio

Model management is a workflow within the overall model lifecycle that can be used to manage multiple versions of deployed models in production. RStudio helps you use Python tooling to develop, deploy, and manage models in production environments within enterprise organizations.

Different components of a model deployment pipeline can be developed using RStudio professional products to:

The following example demonstrates a full model lifecycle for different versions of a model that were developed in RStudio Server Pro and deployed to RStudio Connect.

The data set used in this example involves demographic information and payment history of various customers and whether they defaulted/missed a payment on their credit accounts. 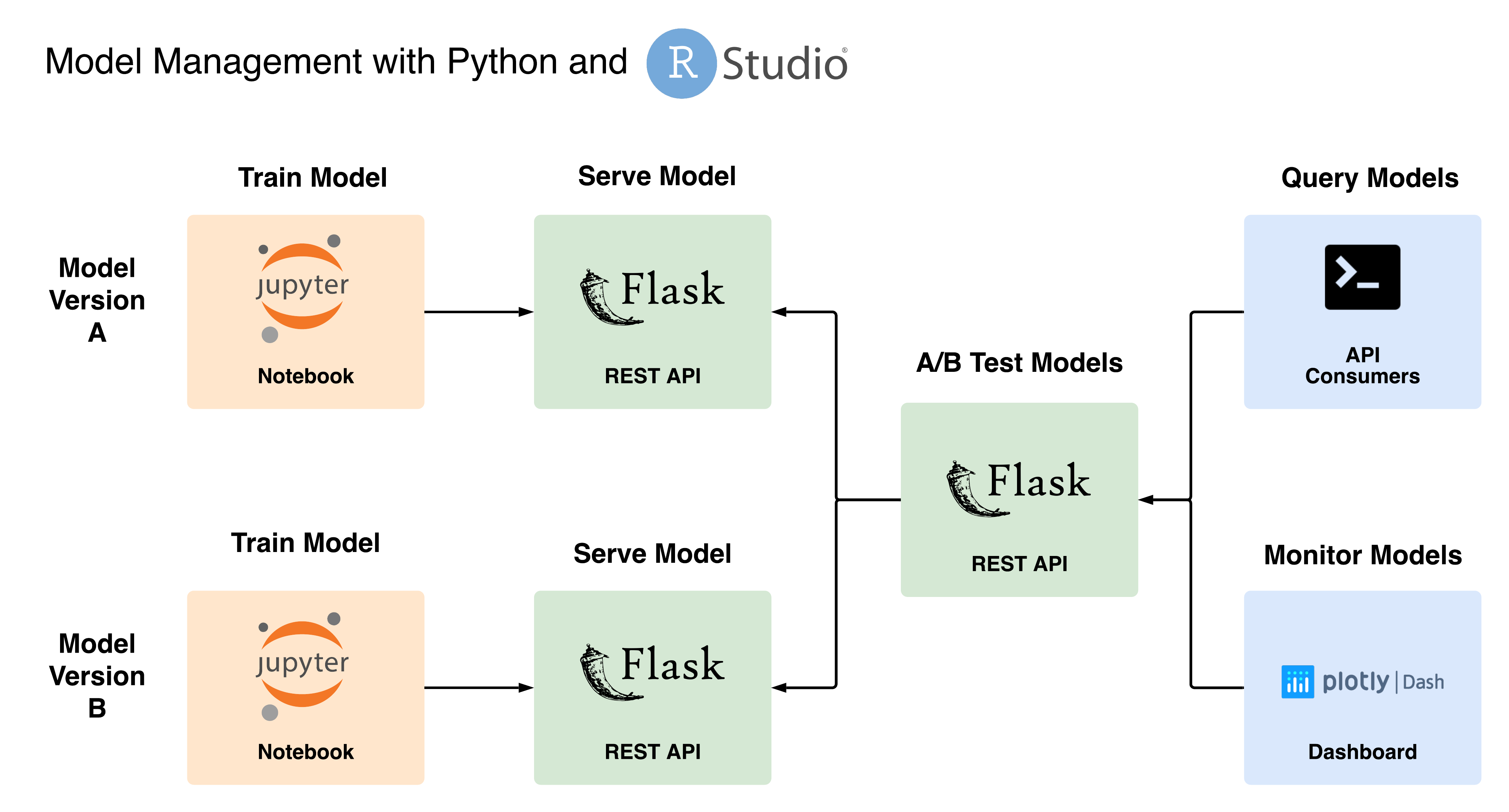 The goals of this model deployment pipeline are to train multiple classification models to predict the probability of a new customer defaulting on their credit payment, serve predictions via a REST API, route API traffic between two different models as part of an A/B testing framework, and run interactive diagnostics to verify the model routing is performing as expected.

The tasks described in the following sections will walk through each stage of the model lifecycle in this example.

You can train a model in a Jupyter Notebook and retain all of the information used to develop the trained model in a published notebook for reproducibility and traceability. 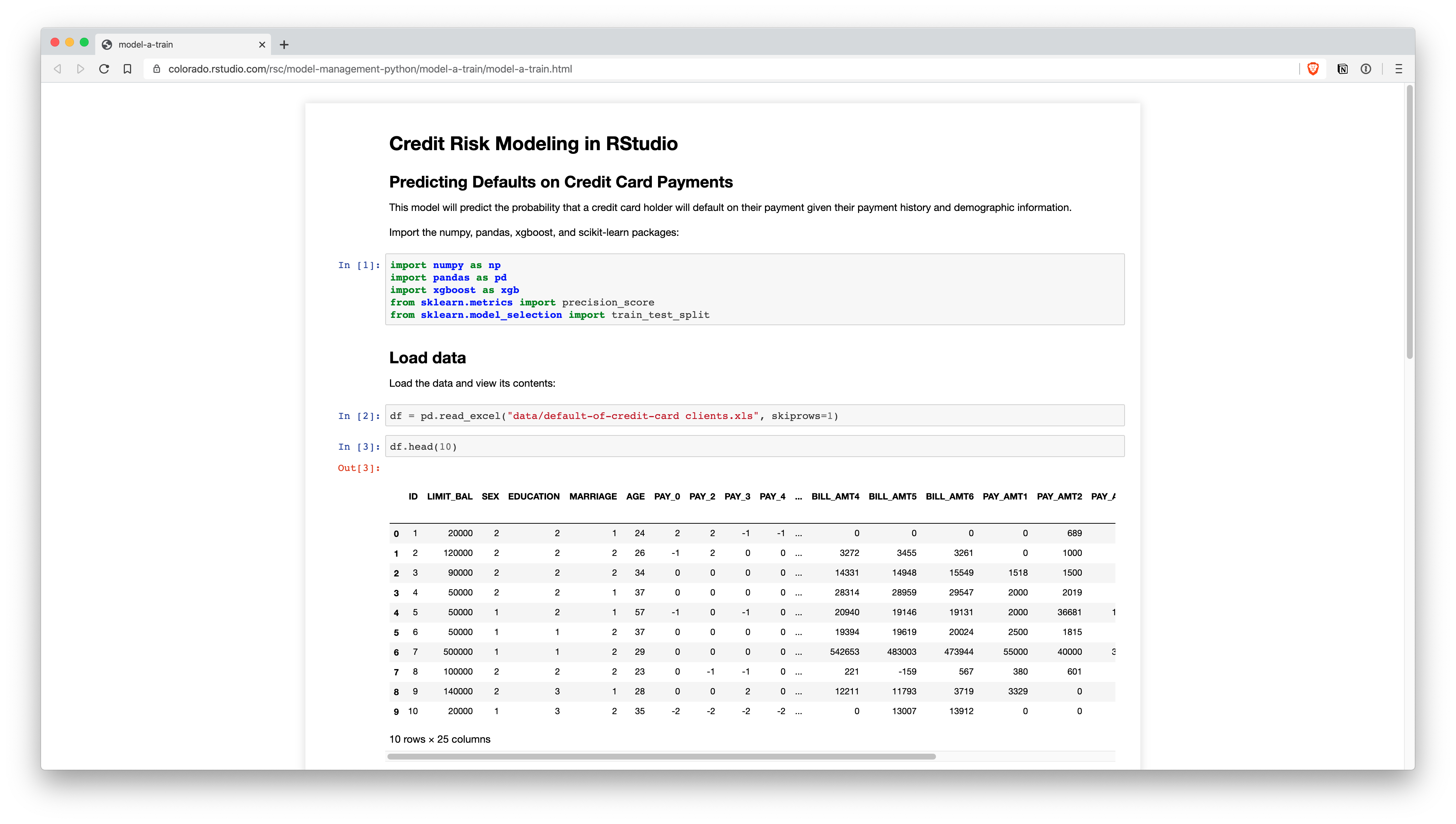 In this example, the published notebook includes a record of the library, algorithm, and parameters used to train the model. Refer to the RStudio Connect User Guide for more information on publishing Jupyter Notebooks.

You can also schedule model training notebooks in RStudio Connect to retrain the model on a recurring basis (e.g., daily or weekly).

Once you’ve trained a model, you can serialize the model to a file, which contains the corresponding trained model weights. You can then serve model predictions via a REST API using Flask. 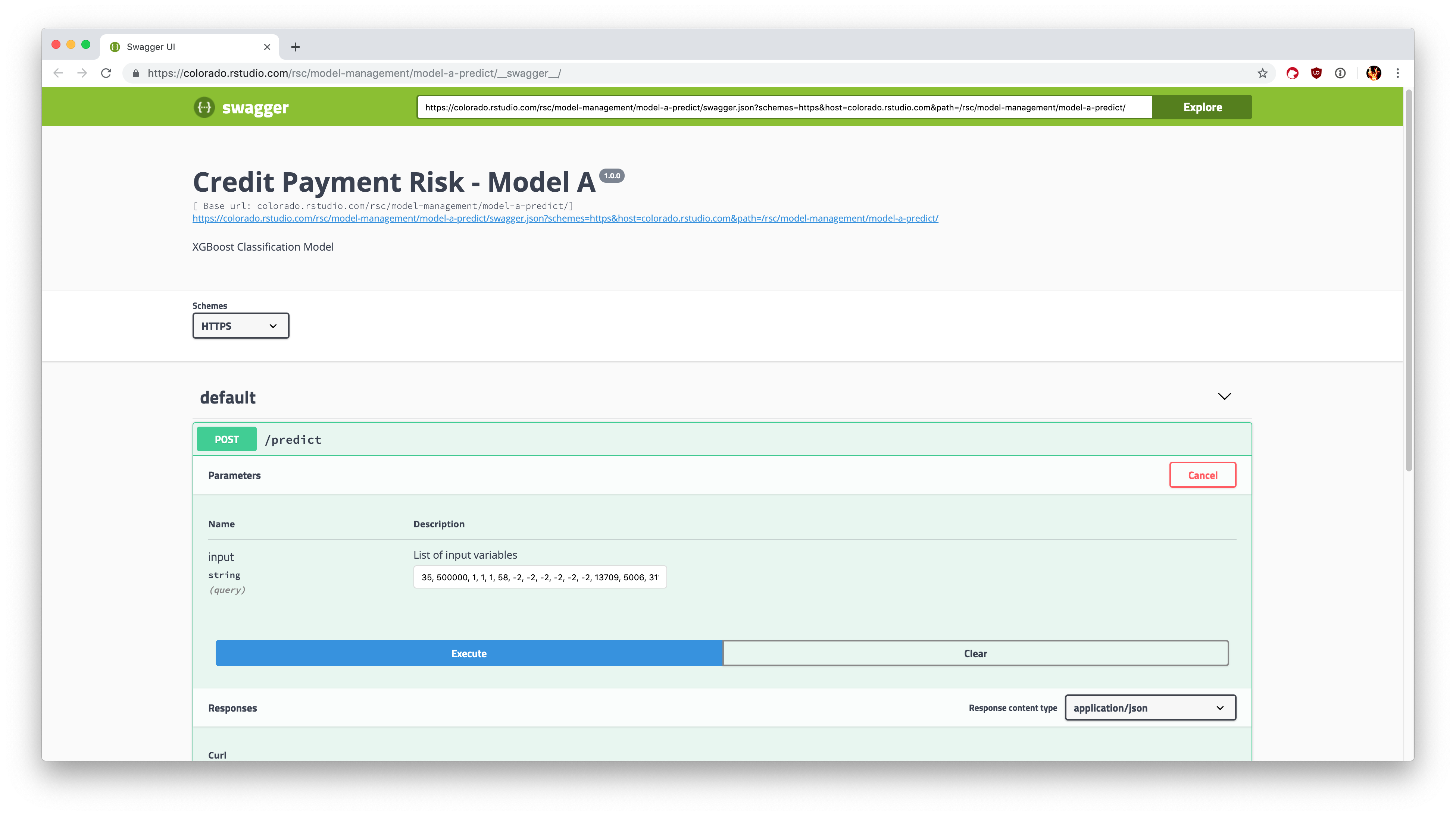 In this example, we deployed the model as a REST API and used a custom content URL such that the model is serving at the /model-management-python/model-a-predict endpoint. Refer to the RStudio Connect User Guide for more information on deploying REST APIs with Flask.

Once you’ve trained a model, you can tune the model based on feedback from either the model evaluation stage or based on the performance of the model in production. You can select and train a different model by changing the library, algorithm, or parameters. 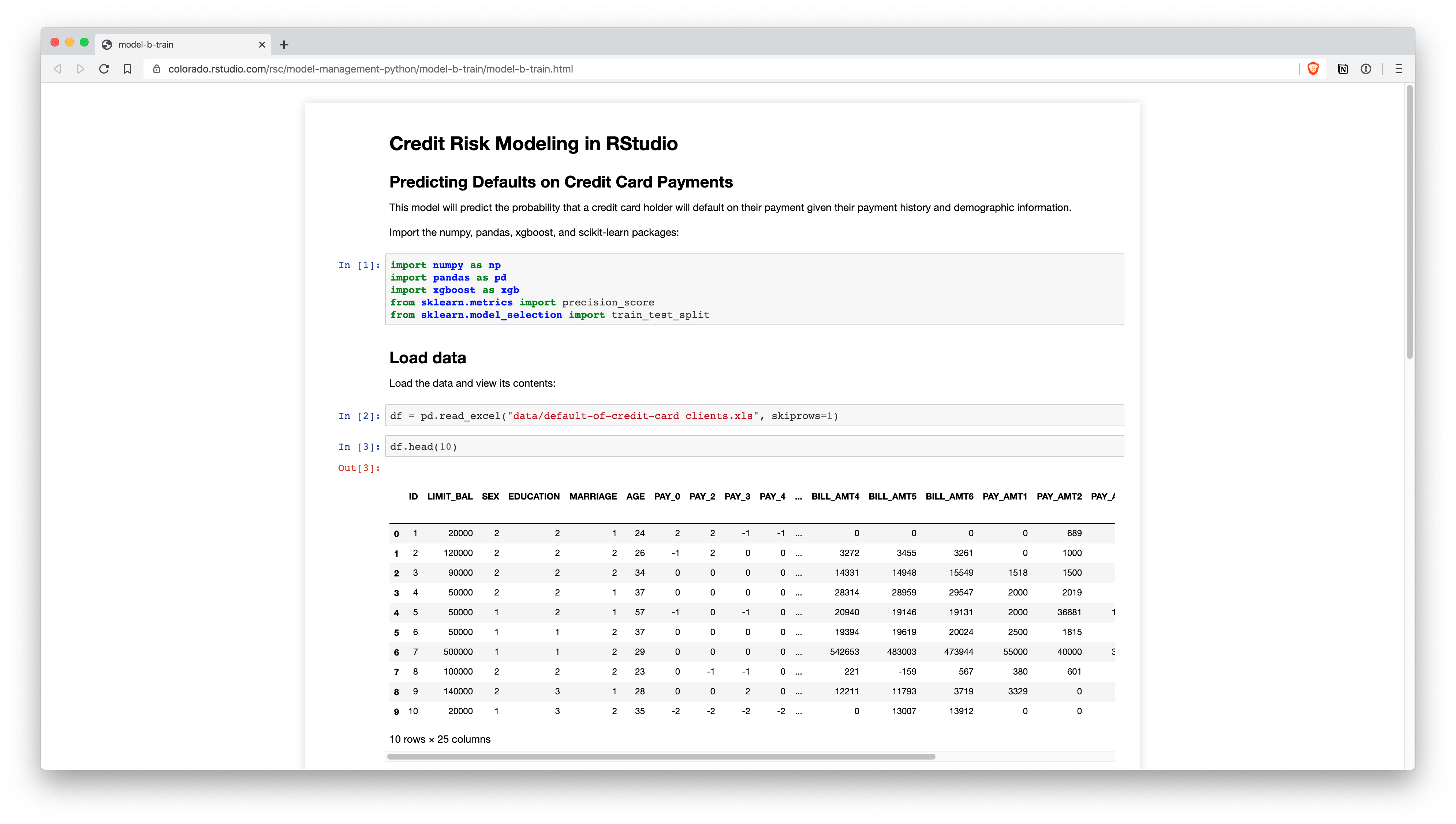 In this example, we changed one of the model parameters and will observe the impact on the importance of the factors in the model.

Deploying a New Version of a Model #

After you’ve developed a new version of a model, you can deploy it as a separate application and REST API. 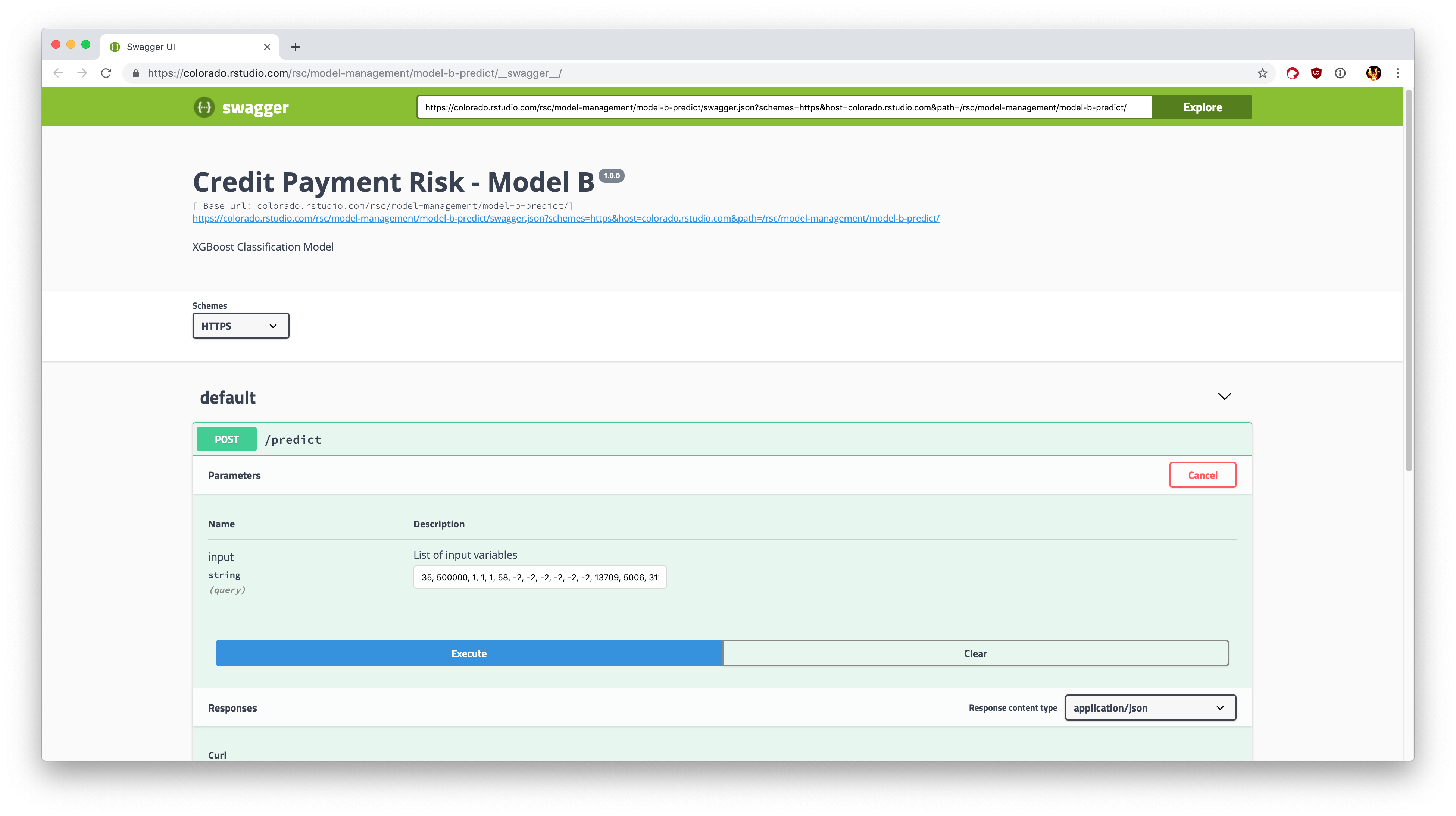 Managing Multiple Versions of a Model #

You can manage multiple versions of a model using different methods in RStudio Connect:

You can also change the logic in the model router to implement different routing schemes such as champion-challenger testing.

Once the models, REST API endpoints, and API routers are deployed to production, they are ready to receive traffic and serve predictions.

You can use a deployed application to simulate API traffic, load test your API endpoints, verify the behavior of the API router, and compare the resulting model predictions. 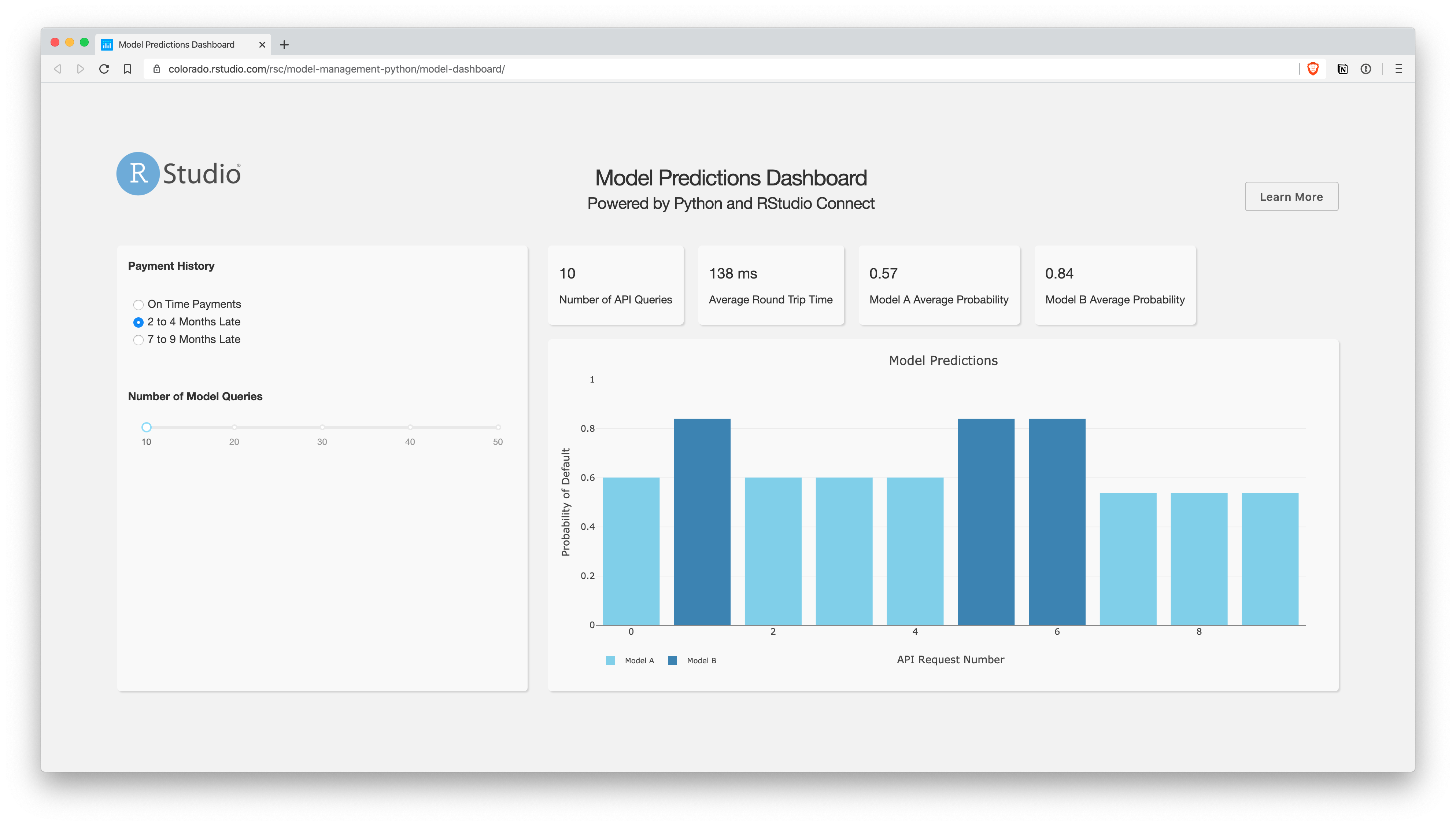 In this example, we deployed an interactive dashboard to simulate continuous API traffic, verify the behavior of the API router, and compare the resulting model predictions.

The purpose of this example is to demonstrate how model management and various stages of the model lifecycle can be mapped to functionality in RStudio Connect.

This example is simplified and can be used as a starting point for model management. There are additional considerations when deploying and managing multiple versions of models:

The source code for all of the model management components described here is available in the sol-eng/model-management-python repository on GitHub.